Exoskeleton is a project in development in which Studio Víctor Pérez-Rul reflects on the bodies of living beings as spheres without borders, as infinite not by extension but by indefiniteness, as permeable spaces, as energy processing systems, and as dynamically preserved patterns that will die and become ruin.

Exoskeleton 1.2 is the sequel, or iteration, of Exoskeleton 1.0, a public sculpture permanently installed at the Emma S. Barrientos Mexican American Cultural Center (MACC) in the city of Austin, Texas. It was unveiled in 2017 as part of the Casa México program within the framework of the South x Southwest festival. When Exoskeleton 1.0 was unveiled, it was raining—as the law of everything that works with solar energy and Murphy's law dictate—and a year later, the day I came back for maintenance, it was not only raining but a storm was raging.

Exoskeleton 1.2 is a solar sculpture that I have exhibited about five times in the last 12 months and which was originally commissioned to be presented at the 2019 Bahidorá Carnival. The first time it was exhibited, it was not finished, but it was a sample of the undergoing process and it was mounted in integration with other sculptures that evoked unknown creatures as an installation under the name of Weird Fishes. Weird Fishes was part of the Modern Love exhibition, curated by Daril Fortis during the Mexico City Art Week in February 2019. It passed without penalty or glory.

The second exhibition, the first truly official one as Exoskeleton 1.2, was at the Bahidorá Carnival, also in February 2019. Thanks to the enthusiasm and awareness of the importance of art by Céline Huerta, this piece was commissioned by Distrito Global through her, to be exhibited at the carnival. Exoskeleton 1.2 would not exist without the faith, enthusiasm, and great work of Céline and company. Among consolidated, junior and emerging artist projects, the carnival presents, every year, a heterogeneous spectrum of artistic works in the paradisiacal context of Las Estacas ecological park in the state of Morelos, Mexico.

My friend and supporter Felipe Hernández helped me assemble Exoskeleton 1.2 for the Bahidorá carnival, and it took us a little under three days. It is a simple piece in principle, but the location, the heat, and the challenge of putting a sphere two meters in diameter in the center of a moderately deep river with a respectable current, consumed the hours in a voracious way.

I am not going to delve into the whole issue of assembling a piece like this, but I do want to relate a fragment (perhaps within our subjective experience the most important moment of all, as well as the most anecdotal):

>>> The previous night, Felipe and I had left the piece ready on the ground (the most magical moment: in total darkness, Exoskeleton was reflected when it pulsed with its cold light emanating from its center and reflected by a mirror of water. It mixed its bone reflections and its circular lights with the concert of crickets, frogs, toads, and other nocturnal animals. One did not know if it was on planet Earth today, 2,500 years or 3,000 years ago) so during the morning we only had to take care of installing it in midstream. Therefore, we did it. The physical challenge was tough, but with the proper planning and concentration we developed, we managed to install Exoskeleton 1.2 in place. Everything was working perfectly: the piece was receiving sunlight, charging with energy, and looking beautiful fused with the landscape; a spaceship or a being from another world or something from the realm of the microscopic was there, in the middle of the crystalline waters of a river that begins in and crosses Las Estacas park. It was early and in a few hours, we had an appointment for the press conference, the media tour, and the photographs. We went to bathe, eat, and rest for a while.

When we returned, already bathed, polished, eaten, happy, satisfied, and in advance for the press appointment, we realized that someone had swam to the sculpture, had wanted to get on it and had thrown it from its base. Felipe and I turned to each other with a perplexed look; we argued a bit and then took pure action. ->

We took off our clothes and went into the river in our underwear, we took the sculpture—which had begun to accumulate water in its body and had become very heavy, although it still floated—and took it to the shore. Carrying rocks under the water, we repositioned the metal base in place. We returned for the sculpture and put it back through a combinatorial exercise of freediving, obstetrics, aqua aerobics and exemplary crossfit. I am not kidding, when we got out of the water, Felipe and I were oxygen high, the work of hours during the whole morning had been repeated in 15 minutes.

When we finished placing the piece, I turned towards the path that brought visitors from the park entrance to the Exoskeleton area and a long line of media people came, camera in hand, notebooks and smartphones out of their covers.

Felipe could not care less, he was drugged in his own breathing, and began chatting with some locals who enjoyed the atypical spectacle that gave the implausible life of art: two dudes in underwear carrying, in the style of Atlas himself, river out, river in, a bone-colored, plaster-colored geodesic sphere, two meters in diameter, that contained a transparent sphere that contained red and gray scrolls of unknown materials and that, the weirdos said, was alive and fed on sunlight like a plant.

When I saw the press, all I could do was get out of the river, take my pants, my shirt and get dressed as if by a miracle. Everyone arrived fresh and eager for information. I was draining water, with my wet pants denoting my underwear and panting like a coastal dog that just freed himself from the wallow. What is your name? What do you work with? What inspired you to make this piece? How does it work?

As we finished, Felipe and I went for a ride still on the cusp of the emotion triggered by the physical effort and over oxygenation.

The rest of the exhibition, the sculpture did whatever and was wherever it wanted. It had to be moved four more times. It was assembled, it was disassembled, it was turned, it was straightened, yet it remained always dignified and working. Felipe and I nicknamed Exoskeleton 1.2 as "La Doña" (something more or less like “The Mrs.”), because she always does what she wants, whenever and wherever she wants. From La Doña we learned thousands of things that cannot be expressed in words. It also triggered a catharsis that still echoes in the work of Studio Víctor Pérez-Rul and in the cultural projects of Felipe Hernández: life is the greatest phenomenon. Moreover, if you make a work of art that claims to be alive, you stick to the phenomenon itself, the illusion of control fades, and you find yourself facing a series of forces sometimes pleasurable, sometimes ungrateful, but always pure—beautiful brute force, intelligence existing before and beyond words. <<<

After being in Bahidorá, Exoskeleton 1.2 was at the Akamba festival in Tequila, Jalisco. We assembled it in four hours, and we disassembled it in two. On this trip, Felipe was angry with me because I had not told him that La Doña, in addition to feeding on the sun and pulsing with light at sunset, tunes into radio frequencies whenever it pleases, turning them audible and modulating them depending on the amount of daylight. When this happens, the sculpture emits a high-pitched sound, like that of a cicada but higher, or also white noise, or sometimes you can even hear a distorted song; in fact, it depends of whatever is in the air. I had not said anything because it is part of the mystery of a being about whom not everything is known.

Then, it was presented at the open studio that we organized at the end of the summer of 2019 in the studio of the Tabacalera neighborhood, in Mexico City. From there, La Doña traveled to Toluca, where she was exhibited as part of Studio Víctor Pérez-Rul's insertion activities in the project initiated and directed by Ignacio Tovar, the Centro de Futuros (Futures Center) of the Tecnológico de Monterrey University. We assembled La Doña in two hours, and six months later, we disassembled her in half an hour.

This year, Exoskeleton 1.2 was featured in the first edition of OFFsite, a new initiative within the city's art week proposed and curated by Karen Huber and Jeannette Millán. With a year of travel behind it, the sculpture has matured as an object, accumulating matter, earth, water, scrapes and so on from the places it has been. This makes possible its narrative of being a retro-futurist, ancestral-transcendental and living interdimensional traveler whose perfection does not lie in its neatness but in its honesty, in its organic nature and in its aging (the first thing Omar Barquet told me when the piece was freshly installed, new and shiny in Bahidorá, is that it did not look like a live-skeleton. He was right; it looked like a replica of a museum dinosaur, fresh out of the mold). At OFFsite, Exoskeleton joined a group of three sculptures that are a side result of my residence at the Futures Center. These three sculptures, apart from La Doña, are pieces made from stones collected during the residence in Toluca and surround the idea of the theory of the Litho Panspermia (the origin of life on Earth by intergalactic contamination through meteorites and stones as a vehicle for the spread of bacteria and primitive forms of life). The total installation was called Spaceships, Eunice González and I put the piece together in a few hours in this industrial warehouse in the Juárez neighborhood, which sometimes reminds me of a hangar, an ideal place for a spaceship. 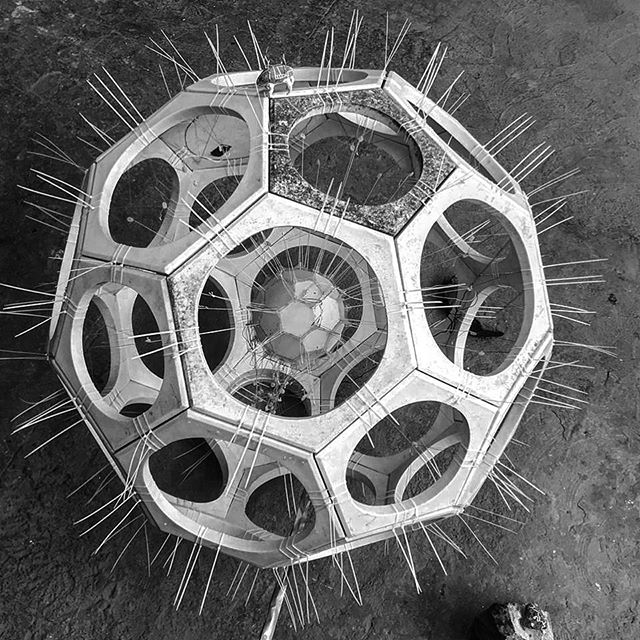 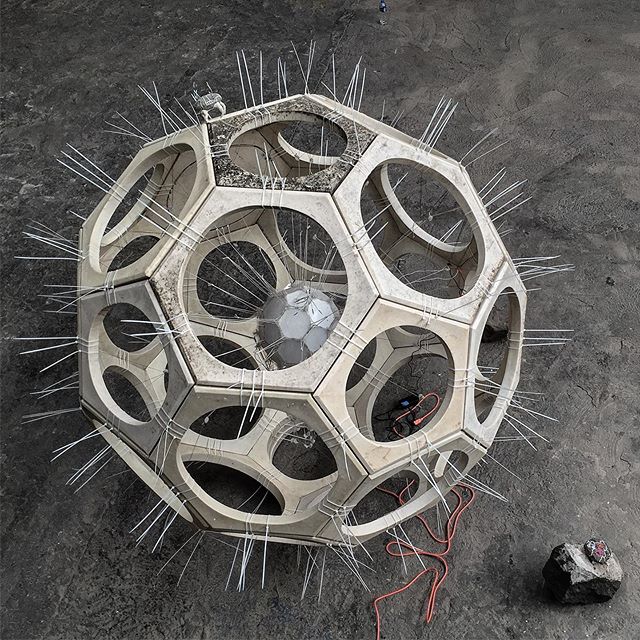 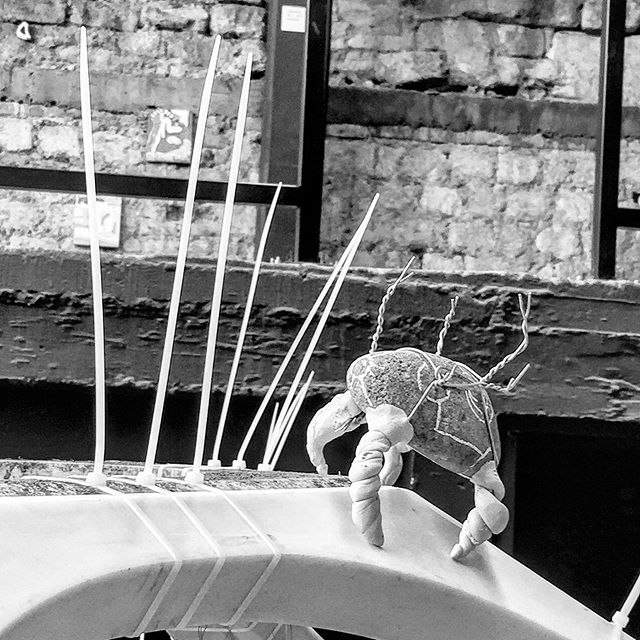 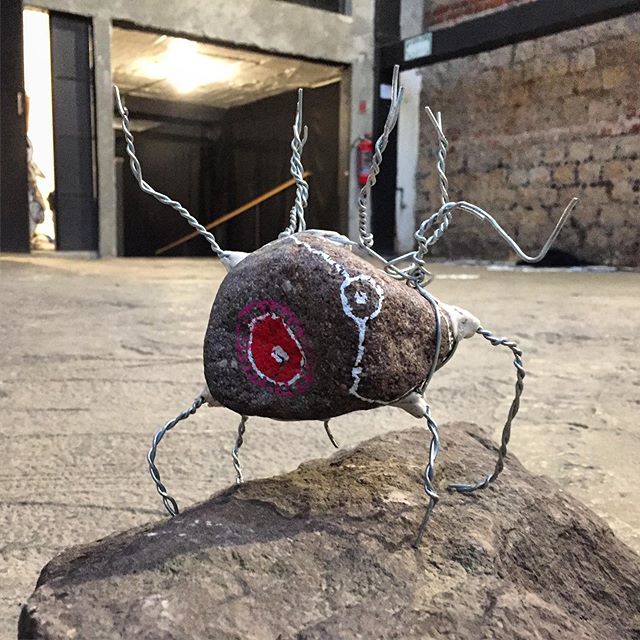 At the end of the 2020 Art Week in Mexico City, La Doña will take off again to land at a new location in the Desierto de los Leones, where it will be integrated into the forest for a few months.

As Exoskeleton 1.2, La Doña continues its journey, accumulating kilometers, manifesting and representing the greatest phenomenon, the phenomenon of the living. We will continue to be avid observers and catalysts of the life, travel and aging of this endearing spaceship.

- Edit february 25, 2020: Last week I was contacted by the guard that was in charge of Exoskeleton 1.2 during the Bahidorá carnival. He told me that after a whole year he finally managed to make contact with me and that he still remembers La Doña and the whole process it implied. I guess that in the end that is what art is about in some sense, about connecting.